I want to write about games and philosophy, but before I really get into it, I want to try and explain the rationale. Let’s start by looking at how Mr. Carse distinguishes between finite games and infinite games:

Table 1: Characteristics of games, as defined in an obscure philosophy text I found in my house and decided to use as a philosophical basis for writing about my ideas related to games. It’s worth reading if you are a strange enough person to be into this sort of thing.

So, why do I want to create a body of writing about games? The idea to do this was conceived when I was looking for one of my books about writing (if there is one thing writers enjoy writing about, it’s writing) and stumbled upon an old philosophy text. I don’t know how or why this book made it into my collection, as the edition I have is about one year younger than myself. Perhaps the title caught my eye several years ago when I was moving out of my parents’ house. Finite and Infinite Games by James Carse: it must be a book about games, right? Hey, I like games, why not give this a try? It took me by surprise how broadly it defined games because we usually don’t think of World War II as a game, but that’s because it was my first introduction to taking a philosophical look at game theory (the academic and philosophical kind, not the silly hat and sexual frustration kind).

As I read and reread the book, I found that looking at games in this way actually helps to explain a lot about why I like the (finite) games that I do, and how to understand things that are happening in the world, like the Trump candidacy.

This is my central idea: games, as we understand the term in plain language, can be used for social good and to understand ourselves. Games can also be used to reinforce injustice and as a glorified form of mental and emotional masturbation. This is true whether we are talking something serious, like an election, or recreational, like a card game. Infinite games, including finite phases that support infinite play, are bigger and worthier pursuits than finite games. For example, the infinite game of life itself (which Carse asserts is the only infinite game) is much greater and more rewarding than a game of chess. It doesn’t mean chess is necessarily bad or useless, it just needs to be kept in its place alongside other finite endeavours. 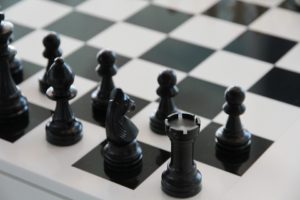 Although there are more game states of chess than there are particles in the observable universe, chess is a finite game.

The outcome of a single chess match is unimportant, but a person teaching that game to a child who is gaining knowledge about fair play and logic does matter a little bit. And when you look at the game of chess as a whole, it becomes more and more relevant to the larger picture. My goal, in writing about other games or designing my own, is to see finite games used to promote a mindset of infinite play.

Infinite play, being an infinite player, why do I speak of these as being “good” things? Well, as I said above, it is not necessarily a good vs. bad distinction, but I think there are distinct virtues in infinite play. Who doesn’t aspire to be the kind of person whose view of life embraces horizons rather than boundaries, continuation of play over competing to win, and trying to keep as many people in play as possible? There are people who are obsessively finite, but most of us tend to think they’re jerks (or at least acting like one out of ignorance and/or immaturity). The guys in The Big Short who brag about scamming immigrants because it makes them a lot of money, the egotistical football player who pushes the boundaries of showboating upon scoring a goal, the six year old who just flipped over the checkers board because it became clear he is losing. These are not people I would want to be identified with. I may play football, or checkers, or financial investment, but in all of those I hope I can be the kind of person who supports infinite play.

This post allowed me to get a lot of heavy stuff out of the way so that my reader(s) can understand where I am coming from. I promise more levity and snark in upcoming weeks, but rest assured there is a point in all of it. If this sounds like a good deal to you, come back Saturdays at noon, mountain time. Follow me on Twitter or like my Facebook page to receive regular updates.