Last week, to celebrate the conclusion of kitchen renovations, I had a dinner party featuring a game I had never played before. Seeing that the name of the game is “Top Trumps” and the theme is Marvel heroes, I came to the conclusion that it was time to make Captain America great again. As you should know by now, the Trump name means quality. So I had some people over. Smart people, who like to play card games. Nobody hosts a dinner party better than me, OK? 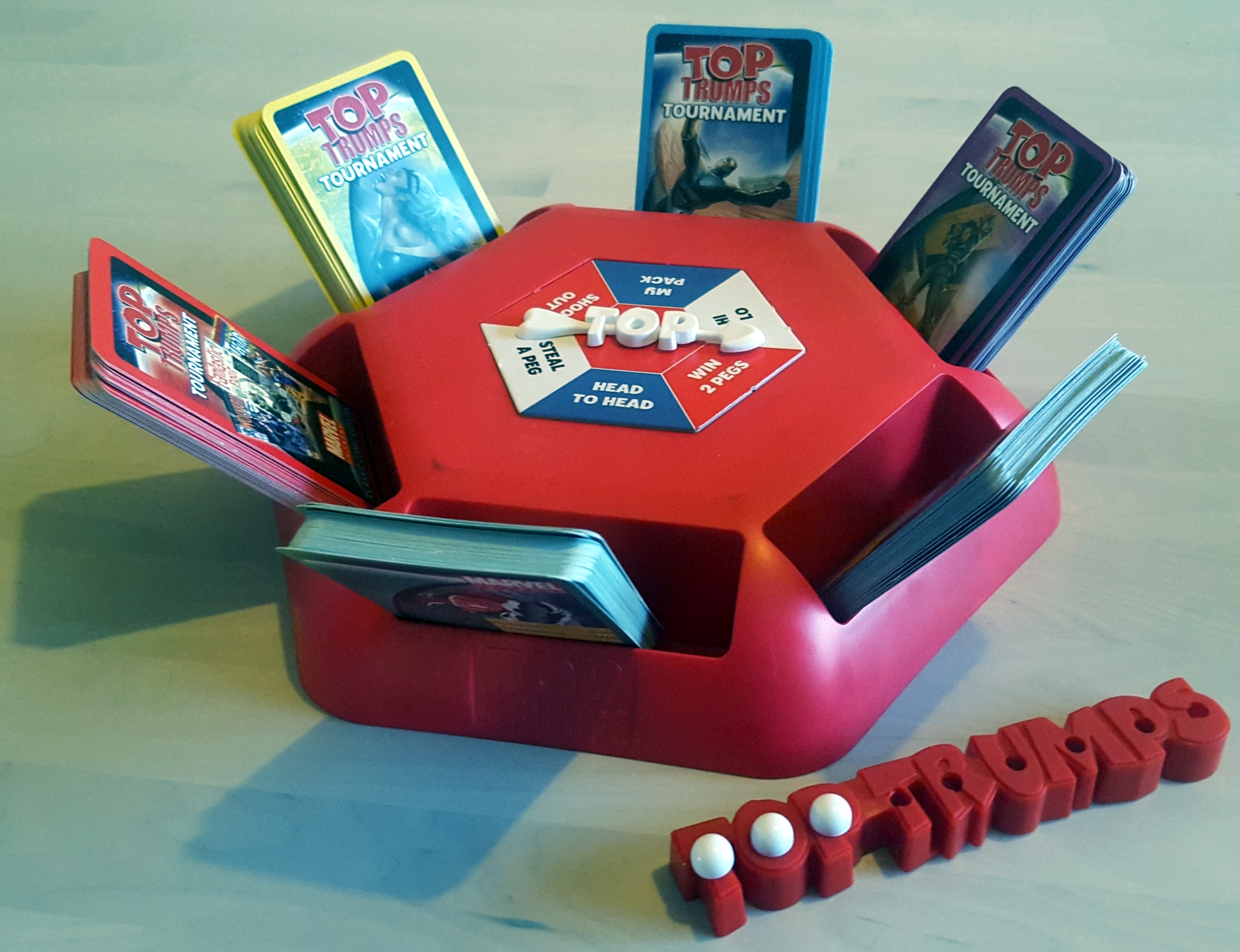 Here is the gist of the game: you spin the wheel in the centre, and do one of three things: receive pegs, steal a peg, or play one of the “mini-games” named on the wheel. The game comes with an ambiguously worded reference sheet that provides some of the rules for each game. In general, the player whose turn it is chooses which “stat” is being played from four listed on each card, and (presumably) the highest number wins. The differences between the four mini-games are in how many players will participate and how many cards each will receive. The main game involved receiving enough pegs for the first player to fill the score board with nine, with the relative amount of pegs each player has determining how many cards they receive for the final battle (which plays out much like the “My Pack” mini-game but with more cards in play).

I said the rule sheet contains some of the rules because it does not address some common game states. Can a player keep calling the same victory condition and playing the same card, knowing it will keep on winning? The player is instructed to call the next stat from their “next card” but does not specify if cards can be played more than once in the same mini-game. Other things are also left unclear in the written rules: in a contest, does the debut year count up (newest wins), count down (oldest wins), or can it go either way at the discretion of the player calling the stat? What happens when players tie on a stat when playing with only one card left (the rules talk about how to resolve a draw with the next card). We ended up making up house rules left and right just to keep the game going. That’s not something you usually do in a finite game, but we did it because the alternative was to declare the game a failure and stop playing. That just wouldn’t do.

While it seems possible that there is a method to the madness when selecting which set of numbers will be used to determine the winner, the whole thing seems fairly arbitrary unless we completely missed something. If there is such thing as a winning strategy, it’s not clear unless one knows each deck of cards backwards and forwards and can therefore tell whether 46 is the highest possible number or if it is pathetic compared to other cards in the same deck. 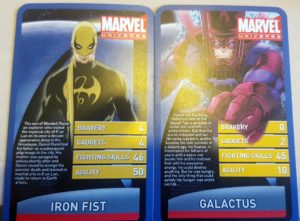 There were several other design decisions that left my party baffled. For one thing, each deck has a different set of statistics that can be drawn from, such as the Avengers deck which included strength, ancient power, size, and technology. While each card featured nice artwork and neat little write-ups on each character, the numbers didn’t seem to correspond with any sort of logic based on what we know about the characters. I’m not knocking the Iron Fist, but the fact that he outclasses the devourer of worlds in every stat raises some questions such as “do these numbers actually mean anything?” If one tries to apply reasoning based on the character descriptions and/or portrayals in various media, it would be logical to assume that Galactus, whose biography reads more like that of an elder god than an ordinary person with extraordinary abilities, would be a fairly powerful adversary. Yet here he is, losing in every single category to a martial arts master. Captain America has the same strength rating as The Hulk. And then there is the Heroines deck:

Debut year, OK. Intelligence, sure, but why does it only seem to go up to ten while the other ratings have much higher numbers? Oh, then we can explore their mysterious “dark side” of those weird and exotic creatures known as women(!) And then we have outfit. Yeah, while Marvel Knights contend with each other based on bravery and fighting skills we have contests between the heroines based on outfits. Which, as we can see, follow a distinct pattern. Squirrel Girl’s decidedly unsexy fursuit comes in at the lowest rating, far outclassed by a naked Storm whose “outfit” is entirely comprised by a conveniently placed cloud in the foreground. Sad.

Does any of this make me disappointed that I built a dinner party around this game? Absolutely not! From a game design perspective, the game was mediocre at best. It’s War with a few bells and whistles. But there is more to enjoying a game than balancing random chance with strategy. Getting a good group together, sharing good food, then playing a game we’re not the least bit shy about making fun of while we play it made all the difference. I will certainly play this game again, perhaps in the dying hours of this year’s Extra Life marathon when nobody is awake enough to take a game seriously if they tried. I had a lot of fun with this game, and what else could I have expected or asked for other than that?

By playing this game I learned that to be the Top Trumps Tournament Champion, one needs to be lucky on spins of the wheel and draws from the decks, exploit knowledge of a game that seems to defy all logic and reason, then know how to make the best judgement calls on what the heroines are wearing. Facts don’t matter, only having the winning numbers. I guess it does live up to the yuge expectations the name of the game set up for me.