This is my 30th post on this blog. I think I’ve got enough space here now to be a little bit self-referential. Today, rather than talking about tabletop games or video games or political games I will be reflecting a little bit on my approach then announcing some new stuff!

This may seem counter-intuitive to people who know how blogging works, but I’ve actually avoided doing a lot of self-promotion since I started the blog. I didn’t want to put time, effort, and possibly money into hyping up something and then have it fizzle out just like billions of other ideas that people on the internet have. I didn’t want to try and sell people a promise. Now I feel like I’ve got a solid base of content that shows that I’m somewhat serious about creating stuff. So, without further ado…

Here is some new stuff that I have either added today or will be doing in the near future:

Mandagon: I Don’t Get It

“Explore Mandagon, a world inspired by Tibetan theology and philosophy. With a focus on life and death, discover what it means to make a true sacrifice…” – Mandagon’s store page on Steam

That sounds exciting, doesn’t it? Sounds like a video game I would write about. And available for free on Steam? Too good to be true! I just had to download and play Mandagon. The game is relatively easy to understand: you move your totem-block avatar through what I think is the most beautiful pixel-art landscape I have ever seen. This game is gorgeous.

It seems fairly straightforward: you find stone tablets to insert in the shrines, and in doing so unseal the big temple door. Along the way the player also finds several cryptic messages in a series of steles:

The mechanics are neat, especially the statues that enabled short-range flying. Other things like unlocking the elevators was just challenging enough to make it feel like a game without making it difficult. There are also lots of seemingly-significant symbols scattered throughout the world:

There is just one problem in all of this: I don’t get it. The game was a fun little diversion and I loved the art. But the world itself remains just as much a mystery to me as it did when I read the description before downloading. I suppose I might have been able to piece something together if I wrote down all the cryptic messages from the steles. But I without an in-game incentive it was hard to find enough determination to figure it out. I just cruised through the world and did what I was incentivized to do: get the tablets to break the seals to unlock the big fancy temple door. Where is the theology? Where is the philosophy? Perhaps over my head, perhaps I passed it by, but wherever those things were it didn’t hit me. I didn’t get my mind blown any more than I did when I played through Hook, another simple almost-free game I picked up looking for a simple diversion. It was peaceful, fun, then over.

This is one thing I hope to avoid in my own work: being too clever, too subtle, for my readers/players to get it. While I might strive to write a video game or a tabletop adventure for “everyone” I still have to remember that I can only reach people who come into the experience with a similar enough set of tropes in their mind. I found Mandagon to be good, but I lacked the context to be able to appreciate anything deeper than the simple game of matching the tablets to the shrines. Perhaps I will have to find some references, read up on Tibetan Buddhism, and try again. But for now, I still have to admit that I just don’t get it yet.

The Election of 201X

Can we get back to Undertale? Please! 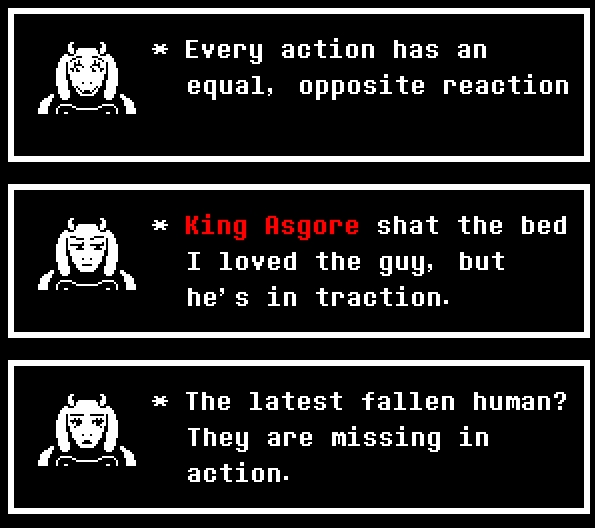 I typically don’t see a film more than once during its time in the theatres. It has to be exceptional for me to go a second time before it’s available on home media. Going a third time is almost unheard of. There is only one film that I saw on the big screen three times. That film is V for Vendetta. With November 5 falling on a Saturday this year, I figured it would be a wasted opportunity to forgo talking about Guy Fawkes, V, and the meme that mask has come to represent.

Guy Fawkes was a terrorist before “terrorism” was a thing. It certainly wasn’t a good time to be a Roman Catholic in England in 1605. Now, 411 years later, we still have trouble figuring out which forms of resistance are acceptable and which forms are cures worse than the disease. The fact that Fawkes, Catesby, et. al. wanted to murder lots of people to facilitate the rise to power of their monarch of choice is conveniently ignored in V for Vendetta, especially in the film. That parliament is conveniently free from honourable members from such-and-such county, lords of wherever, and all the various staff and servants makes blowing it up less terrorist-y so that we can still identify with V. He is the liberal freedom fighter who kills a handful of neo-fascist collaborators with surgical precision. We can get on board with that, right? Just kill the ones who surely deserve it, with zero collateral damage. Doesn’t that make it easier to wear the mask of the man who would have committed an atrocity?

Sure, it makes it a better popcorn flick to be able to adopt Prothero’s slogan good guys win, bad guys lose, England prevails with a 180-degree turn to cast V as the good guy, the neo-fascists as the bad guys, and the secretly anti-Norsefire everyman as the true Englishman. But the anarchist V from the graphic novel has far fewer scruples than our 2006 superhero, and the real Guy Fawkes even fewer. The V of Moore’s graphic novels is more ambiguous, certainly doing more killing and destroying, but is acting in perfect accordance with his convictions whether we agree with them or not. The gunpowder plot conspirators cannot even claim that level of ideological purity, as we know that they would personally benefit from having a Catholic on the throne. So no matter how much I might deplore intrafaith persecution and violence, it is quite clear that I cannot even sympathize with Guy Fawkes (while still being glad the treason and plot failed.)  Nor can I endorse the unfettered anarchism of the graphic novel V any more than I can look back on la Terrueur and think of it as a great time for freedom. The mask which represents Guy Fawkes represents something far more troubling than the thought of an explosion destroying the British parliament. It represents rebellion unconstrained by the rules we have become very fond of in liberal democratic countries.

By the time we get to the film, V for Vendetta is thoroughly whitewashed and ready for North American liberal consumption. I have mixed feelings about this. On the one hand, when the movie industry acquires the rights to Alan Moore’s graphic novels they invariably create something that makes him angrily scrub his name from the project. He doesn’t seem to like it when other people make the story palatable to western liberals who like ideas and a little bit of a gray scale when it comes to morality in fiction, but who also aren’t allergic to fun and being entertained. That’s not a criticism coming from me. I like what has been built to appeal to my tastes, and so in the case of both V for Vendetta and Watchmen I enjoyed the movies more than the graphic novels.

I remember how the film inspired me. I also remember the outrageous amount of money I paid to have one of those masks shipped to my house in time for the following Halloween, way before they became ubiquitous. I still have it somewhere. I wore it for a few subsequent Halloween seasons, but then I stopped feeling like it was a good symbol for me. At first it was an article of fandom costume, but then it became the face of Anonymous, which is something I’ve always had a lot of mixed feelings about. Before becoming the face of internet libertarianism, Anonymous emerged from 4chan as a malevolent force, engaging in the sort of mob harassment that we would expect from the alt-right movement today. For the same reasons I am wary of identifying too closely with Moore’s V, I am hesitant to wear the mask that represents something ambiguous at its best. A game cannot be played when the players do not consent to the rules, and the game where political power is based on mob harassment, explosions, and death is not one I am willing to play. I appreciate the art of both the film and the graphic novel, I might wear the mask again as a costume, but the mask is not an icon that can represent who I am.

This month I am participating in Mapvember 2016. Each day of this month I will be posting some old maps from campaigns I have run in the past as well as some originals. If you love grid maps as much as I do then you should be liking my Facebook page or following me on Twitter if you don’t already.

Also, it’s Extra Life day today (November 5, 2016). If you have not already done so, please consider supporting the effort to do something good through gaming.