If you’ve been following this blog for some time then you will expect that when the gaming world and social issues intersect that I am likely to have an opinion on it. But I don’t think I want to spend too much time rehashing why it’s bad to use racial slurs when you are a YouTube celebrity with millions of followers. What I am interested in is how those in positions of authority respond to incidents like this. Something else happened in the gaming world this week, and that’s the collapse of CO2. No, sorry, there hasn’t been a breakthrough in carbon dioxide emission reductions. CO2 in EvE Online stands for Circle of Two, which had been a big alliance in the game for many years. The short version of this story is that a player in the alliance with very high level access to their resources handed over the castle keys to an enemy alliance because he became convinced that the supreme leader has been running the alliance into the ground. Much drama ensues after this betrayal. This is classic EVE as I have come to understand it. Upon learning of the betrayal, gigX (the former CO2 leader) logs on and makes a death threat against The Judge (the betrayer). He is immediately banned. Kotaku has the most in-depth story I’ve read on this so far. What does this have in common with PewDiePie? In both cases, a man went way too far with his words. The difference is that one is banned, and the other is still on his platform.

One could say that CCP is promoting in-game subterfuge and political intrigue by not making the subterfuge and betrayal against the rules. They even include “being the villain” in official advertisements about what one can do in the game. However, when gigX crossed the line into making real-life threats (a big no-no in EvE’s EULA) they didn’t hesitate to ban him. There was no debate over whether words were just words or anything like that. A line was drawn, he crossed it, and he was banned for life without consideration of how much money he had tied up in the game. This is a good example of how speech that isn’t necessarily illegal (local police might not find the threat credible enough to get a warrant) still leads to unfortunate consequences for those who violate community standards.

PewDiePie, meanwhile, still has his popular YouTube channel despite establishing a repeated pattern of behaviour which, while it may not be illegal, is rightly seen as morally reprehensible by decent people. It’s upsetting but certainly not surprising to see some of the usual canards about words being “just words” and all that. First, let’s keep in mind that defences that boil down to “this is not illegal” are usually very poor for establishing the acceptability rather than the legality of the conduct. I don’t think it would be right to bring the full force of the state down on PewDiePie because he dropped an n-bomb on the internet. But that’s not the only alternative to considering what he did to be acceptable. There are individual actions that one can take: I won’t be watching any of his videos and I will encourage others to abandon him as a matter of principle. I will allow YouTube’s response to colour my view of their platform. But, as a society, we need to be denying an audience to these kinds of people. If we fail to do this, then we leave too much room for something akin to a missing stair. The term is usually used in the context of sexual assault/harassment, but I think we could also apply it other kinds of psychological abuse, such as making your fellow online game players wonder if they are actually in real life danger (which has happened over MMO games more than once in the past decade so it’s certainly possible though not very common). It is certainly the case that at my D&D table it would be a terrible failure on the part of our group if a player threatened another player in an explicitly real-life context and we just worked around it rather than addressed it. Whether it was my house and my campaign or one I was just playing in, I would demand that person’s removal. In the case of the Judgement Day scandal, I don’t think The Judge is genuinely scared of gigX. But in this corner of the gaming community, there is a danger that “oh, that’s just how he is” becomes a way to permit behaviour that really ought to be unacceptable. 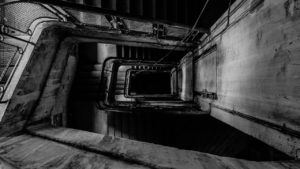 Have you ever been in a house that had something just egregiously wrong with it? Something massively unsafe and uncomfortable and against code, but everyone in the house had been there a long time and was used to it?  “Oh yeah, I almost forgot to tell you, there’s a missing step on the unlit staircase with no railings.  But it’s okay because we all just remember to jump over it.” – Cliff Pervocracy

The troubling aspect of the commentary that objects to the gigX ban is that he should be given consideration because, like PewDiePie, he is a content creator and many people like him. So, the reasoning goes, deny him his platform and droves of people will quit in disgust and ruin something for many more people. I think this is a terrible line of reasoning because it seeks to excuse something that ought not to be acceptable simply on the grounds that the person is popular. If anything, people in these positions of power should be held to a higher standard because they are the ones with more power to set norms in the community. It’s not that I believe that YouTube racists with less than 100 views or the nobodies threatening CODE. agents shouldn’t also be banned, but banning those guys doesn’t send as clear a message when they have no power in the community. Rules and codes of conduct only hold meaning if the popular and powerful are expected to maintain at least the same standards of compliance as the people whose objections can more easily be ignored. If the continuation of the game really does depend on the acceptance of this kind of behaviour, maybe it’s better off not being played at all.

One thing I would like to be very clear about is that denial of audience is not the same as outrage. We don’t need anti-gigX or anti-PewDiePie rage posts; those would be counter-productive. Anyone who has watched Llamas With Hats by FilmCow will see that shouting at Carl’s heinous behaviour not only fails to deter him, but encourages it because it shows him that he still has an audience. Towards the end of part four, Carl calls us out on this: how can anyone be surprised at anything he does, given his history and the fact that despite it all, Paul is still there to see it and shout about it.

The series takes a turn after part 4, the originally intended ending, because somehow FilmCow’s audience kept demanding more. Although he continued to achieve greater and greater heights of depravity, it was all meaningless to Carl because he lacked his audience. He was not defeated by a powerful opposing force or by outrage and denunciation. It all fell apart when Paul decided to pack his bags and leave. That is why I support banning these objectionable people from their respective platforms: while we still let them make us outraged without denying them their audience, they keep on going. While we still continue to live with the guy who is hungry for hands, we are permitting him to continue.

What you permit, you promote. YouTube might do well to take some cues from CCP in this regard.