The Half-Life series of games is significant in the history of Steam. Half-Life is the game that really put Valve, the company behind Steam, on the map. Each rare release in the Half-Life series is acclaimed by critics and eagerly awaited by gamers the world over. It is reasonable to say that the success of Steam is a by-product of the success of Half-Life. In fact, my first games on Steam came from the Orange Box collection, which featured both Half-Life 2 and its two follow-up episodes. However, I’ve never played the original Half-Life. The closest thing I have is Half-Life Deathmatch: Source, a re-release of the the original game’s multiplayer.

In Half-Life, you play as Gordon Freeman, a mute theoretical physicist forced to defend his research facility from  invading aliens and ghoulish special forces after an inter-dimensional experiment goes horribly awry. In Half-Life Deathmatch, the complex story is done away with in favor of maximum accessibility. The players become warriors, fighting in a variety of contained levels against one another, with no greater purpose than to kill, and, arguably, be killed.

Given that Half-Life Deathmatch is a purely multiplayer game, I need people to play it with. However, unlike previous multiplayer games I’ve done on Full Steam Ahead, I have no friends who pay or even own this game. That means I’ll have to find some people online. 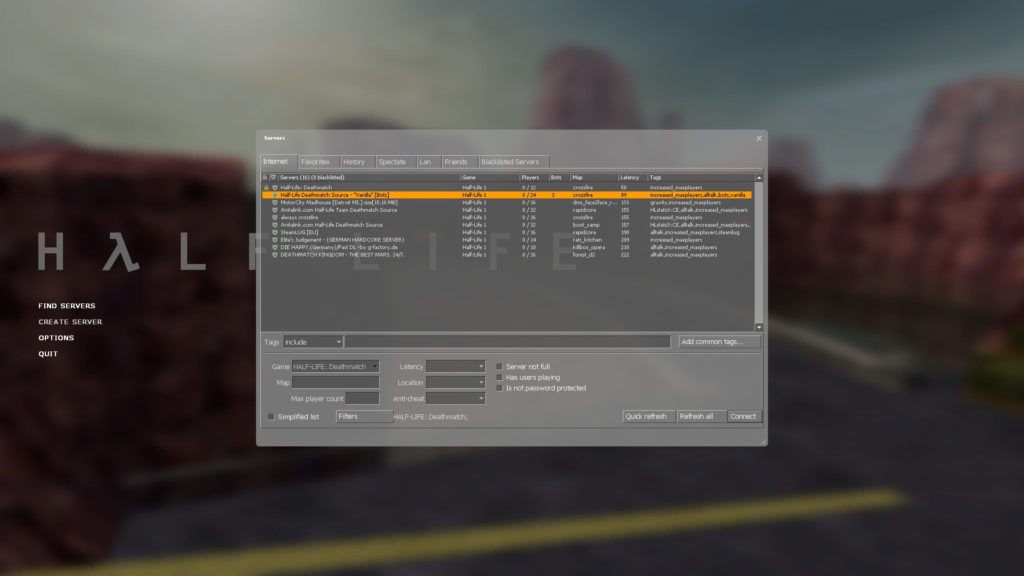 I can only speak to my experience, but Friday night is when I play games the most, especially multiplayer games. For a lot of people, the weekend is coming up, they have plans for Saturday, but Friday night is free. I figured this would be my best bet for finding other people to play with.

Not so much. There are no human players in the game; the world of Half-Life Deathmatch is populated by me and some very tired, very confused AIs. I log onto several of the servers, only to find that they are deserted. Maybe someone set up a dedicated server for their gaming group back in the day, and never got around to shutting it down. On the one server with a few bots, they don’t react normally to me. They stare at me for minutes at a time. For the first several minutes of my login, they make no effort to harm me, or each other.

Maybe the programming which powered these bots long ago ran out, leaving these polygonic warriors without purpose.

Who knows how long this server’s been running. Who knows the last time there were enough people playing this game to give them company. I log out about 18 minutes later.

Fortunately this server is populated, and my computer logs on without incident, dropping me into some kind of tech and research facility, where I am immediately killed by a clone with a laser.

In terms of gameplay, Half-Life Deathmatch is like a time capsule. Movement controls are sticky, finding cover isn’t and integral part of the game’s mechanics, and when you get hit, you just find some health-packs or armour; that’ll knit those broken shins back together in a jiffy! It feels exactly like you’d imagine playing an FPS from 15 years ago feels like. If you’re used to playing Overwatch, or any of the modern Battlefield games, playing this definitely is a jarring experience. Nonetheless, it was well-designed at the time of its release, and the designers clearly put a lot of thought into the level design.

One thing I greatly appreciate about the game’s balancing is how every weapon has its uses, and they are all extremely intuitive. From the rocket launcher (long range splash damage) to the shotgun (short range direct damage) to the crowbar (This is a Half-Life game after all) every weapon can be figured out relatively quickly, and you can adjust your playstyle to best utilize the tools at your disposal. In addition to the game’s balancing, the players seem to keep things somewhat balanced themselves. If I come swinging at someone with a crowbar, even if they have weapons which could easily blow me away while I close distance, they would switch to a crowbar also, so we may face each other as god intended.

I kill. More frequently, I am killed. But most importantly, I have fun. However, I confess myself confused. I’m doing this for an admittedly ridiculous series of posts for my friend’s blog. What has kept all these other players coming here?

I don’t know. Admittedly, I don’t make much of an effort to find out. Afterall, it’s Half-Life Deathmatch, not Half-Life Discussion Group. While I would at least consider buying the latter game due to the name, I can’t even remember how the former got into my Steam library, when it got there, or how much I paid for it. Perhaps it was part of a bundle, but I honestly don’t know what it’s doing here. I’m not about to go asking other people what they’re doing here when I don’t even know my own history; I’m just not the prying type.

Still, the game has passed my metric of a worthwhile experience. I had an enjoyable evening playing this game. At one point, our server had 5 human players on it, which given what I know about the game, seems like a pretty good turnout.

How long can a game last with only a handful of players logging in every week or so? Half-Life Deathmatch may not be a dead game, but it’s certainly not thriving. Maybe players log in at other points during the week or in different timezones. It’s just a hunch, but it leads me to…

I had trouble sleeping Wednesday night/Thursday morning. I thought I’d give my crazy hunch a try. However it doesn’t really pay off. Similar results to the previous two sessions: at most, 3 people logged on over various servers. And, of course, the bots.

There’s a poem, Harlem, of which I’m fond. The poem is very serious, and it uses serious language to tackle a serious matter, but I’m especially fond of the first line. It begins, “What happens to a dream deferred?”

What happens when a game runs out of players? 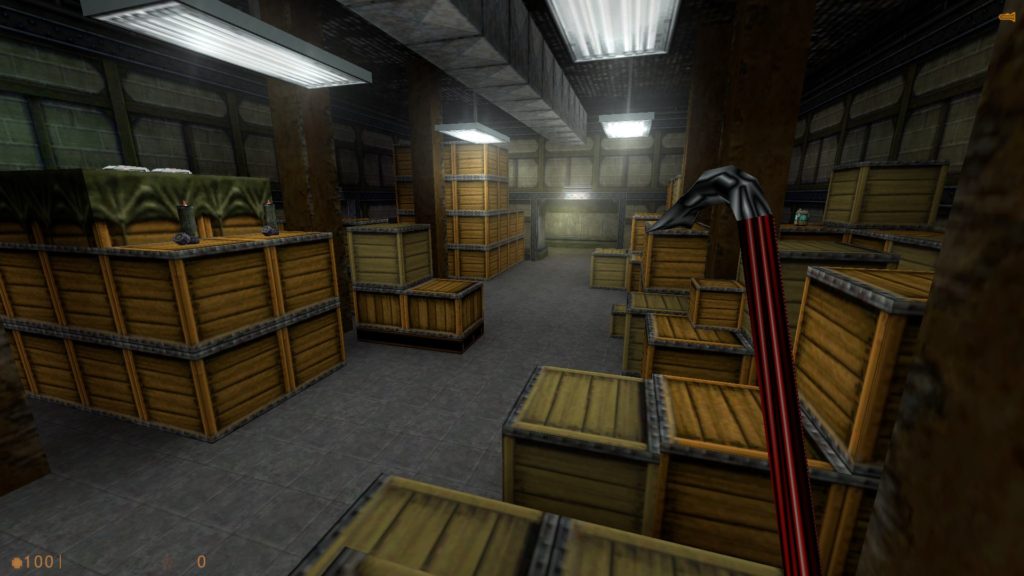 When it the arenas lay empty, when the weapons fall silent? 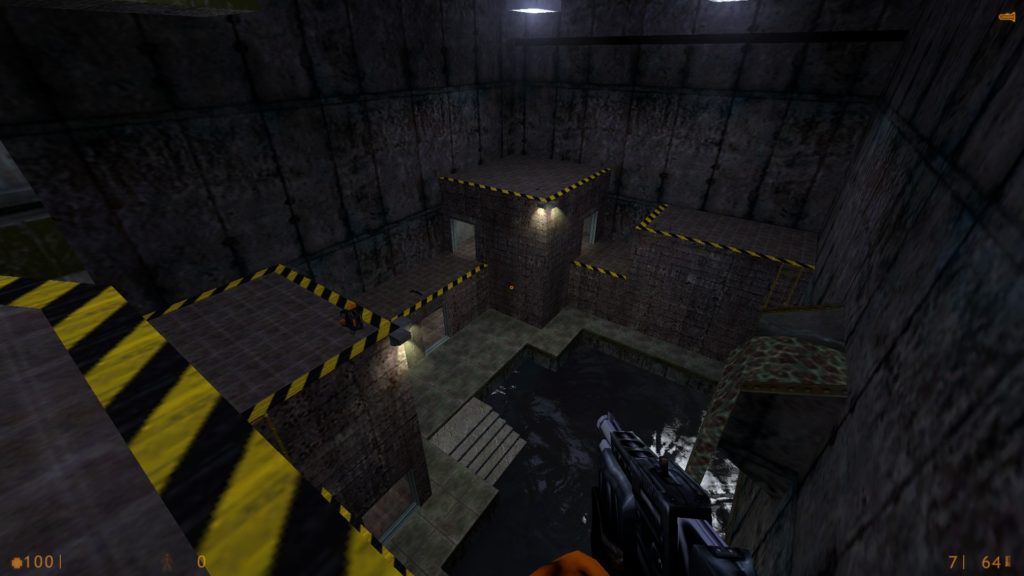 When the only warriors are artificial ones, with no more reason to fight? 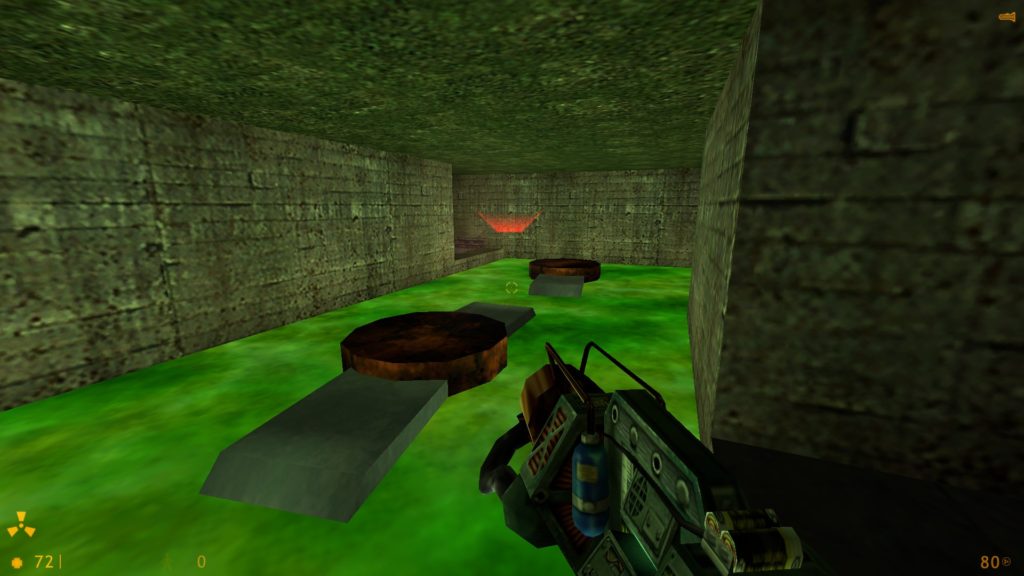 People were once dedicated to these worlds and their battles. 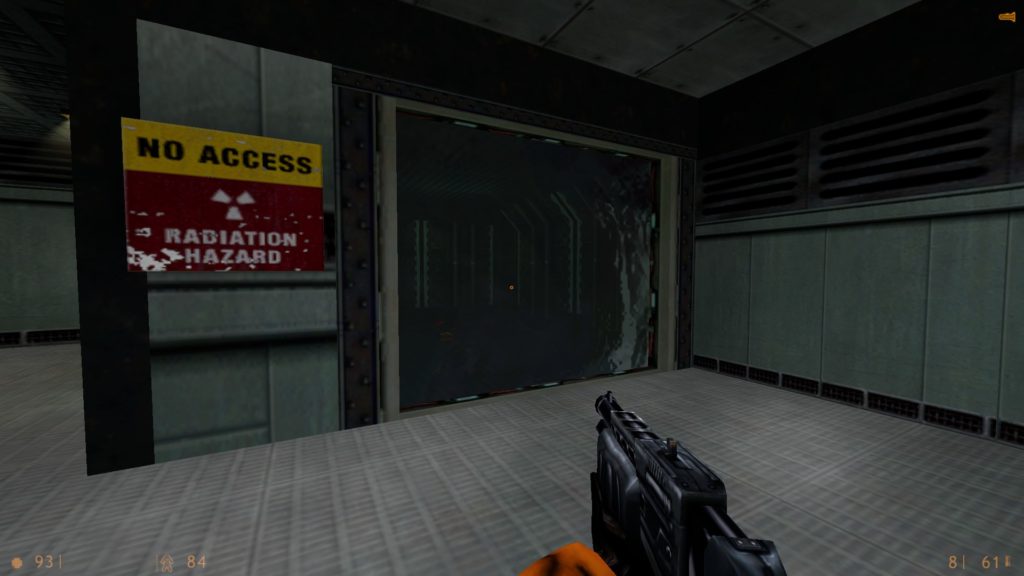 People put effort into this world’s creation and maintenance. 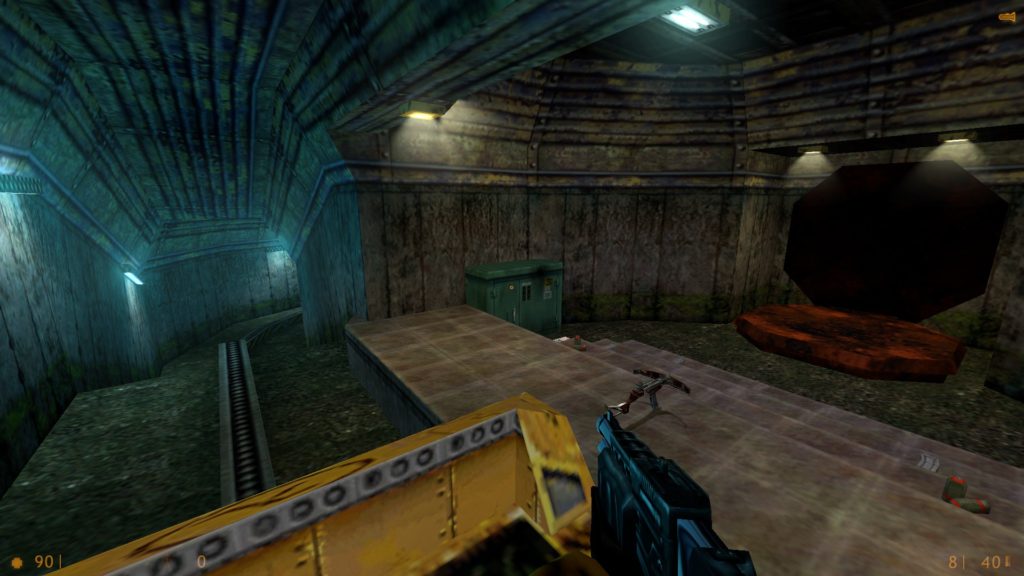 What is a game without anyone to play it? 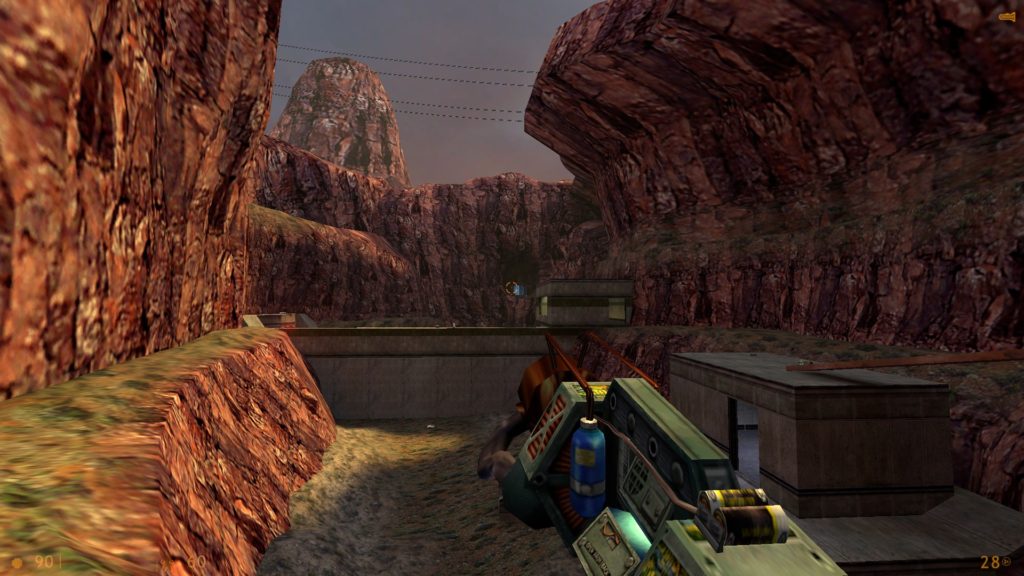 On my Thursday morning login, I played through all the maps I hadn’t seen yet. Not to fight, or to destroy, but just to bear witness to someone else’s creation. There’s a deserted beauty to it. Half-Life Deathmatch isn’t dead yet. There isn’t much left. That doesn’t mean it wasn’t worth seeing.