There are several games I’ve covered (and many more to come) in this series that are difficult to write about. Some are simply too short for me to get much of a read on them. Others are outside my area of expertise. Others are big enough games that I would have to dedicate inordinate amounts of time in order to do them justice.

Others are just kind of weird. The weird games are often the most difficult to write about for a variety of reasons. First of all, weird is an awfully subjective term. For all I know, the weirdest game I’ve ever played could be completely mundane to someone else. What’s more, I always feel like there must be something I’ve missed, some key to help me understand the game, and that I’m not giving it a fair shake.

Cosmic DJ is a short game. It is a game about dance music, a subject where I’m competely clueless. And while it’s not terribly complex or difficult, it is certainly weird.

Perhaps unsurprisingly, this game was a gift from Adam from a few years ago. It allows you to create music. The goal of the game is to restore peace and order to the galaxy through the power of music, in some of the strangest game levels I’ve ever played.

One has me restoring the guardian of a radio transmitter (referred to in-game as a “Jamtenna”). This is simple enough, except the guardian is a Corgi. The Corgi must be restored using the power of music. 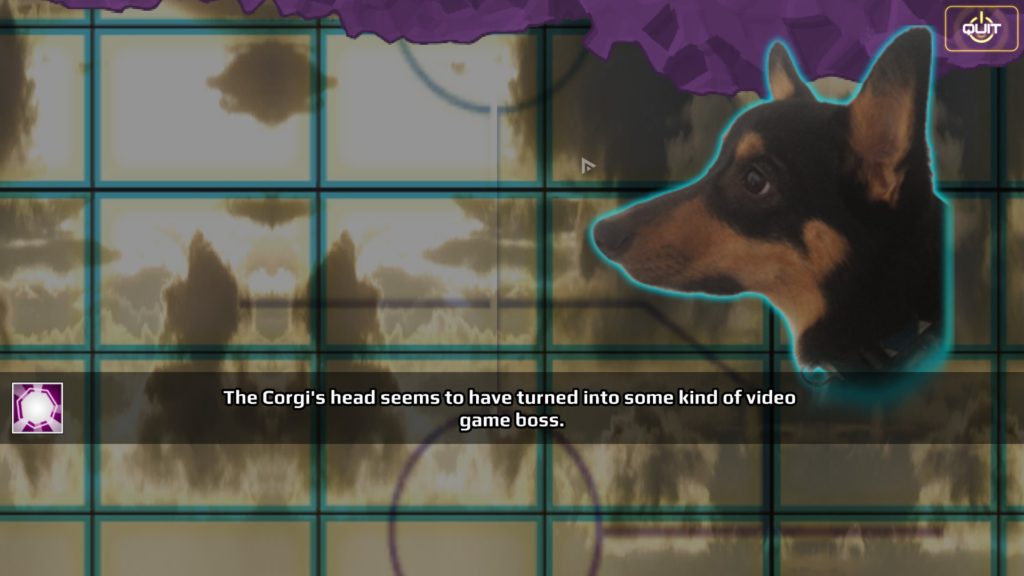 Often I use screenshots to emphasize a particularly powerful moment in a game, or showcase an interesting design choice. For this game, I found myself taking screenshots just to prove I wasn’t hallucinating due to a lack of sleep.

So, how exactly does one use the power of music? Each section of a level gives me 5 pre-recorded instruments, each of which plays four unique notes, and a 32 beat loop to fit them in. Some levels give me really nice instruments that sound pretty good together. Other give me the strangest sounds; most of the corgi levels have an instrument that is just dog barks.

Electronic dance music is not really my jam (or at least, is not my primary jam) so I’m at a bit of a loss knowing what sounds good or not. This confusion is increased by the instruments frequently being odd, the fact that music preferences are highly subjective, and the fact that I only have 32 beats in the loop.

The game gets around subjectivity by having songs measured on a “Jam Meter”. The Jam Meter doesn’t care about where notes are placed, or timing, or musical keys, or syncopation, or any other musical terminology. It cares only about the number of notes from each of the five instruments. It doesn’t matter how bad my music sounds, as long as I’ve placed enough notes, the Jam Meter fills up every time.

It reminds me of my university days when I’d have 2947 words of a minimum 3000 word essay, and have go back to expand all my contractions. Just as my writing came across as forced and and unnecessarily convoluted (okay, my writing is still frequently unnecessarily convoluted, sue me), so the music becomes overcrowded. Too many notes, and all that.

The game also mixes together the music I make to create longer, connected songs, and give me the option to download them or share them. I chose not to, because if I don’t really enjoy the music I’m making, I have a hard time believing anyone else would.

For all of that, Cosmic DJ is a fun, amusing, short little game, and I’m glad I finished it. And while the music made by the game isn’t really fun for me, I can think of one or two people I know who would really get a kick out of it.