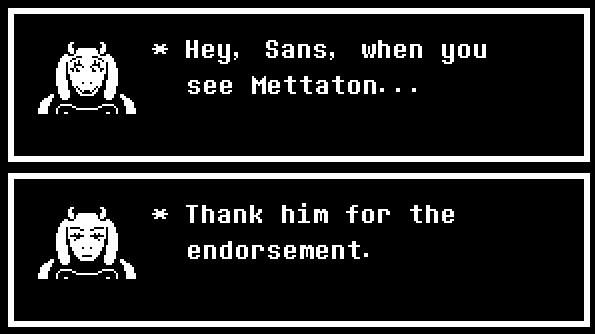 OK, I hope you have enjoyed my fanfic/parody thing mixing Undertale with Hamilton. I tip my hat to Ian McCowan for the dialog generator I used to make it. And I also hope that the slideshow style post didn’t throw you off like it’s one of those annoying clickbait listicles. I assure you that I never plan to monetize this blog with outside advertisements, ever. I reserve the right to promote my own stuff (if I ever publish something that isn’t free), but you can count on me never to startle you with a sonic blast of ad-jingle.

Four days ago, the United States of America made a difficult choice and selected a new president. I live in Canada, but that hardly means we are unaffected. It took not days, but hours, before a candidate for the leadership of our Conservative party started praising Trump and promising to bring his message here.  The world is not watching from the outside; we are on the same boat. In a weird indirect way, it’s almost as if he’s our president too.  If nothing else, the next few years are going to be interesting. I don’t blame others for having a much more emotional reaction than mine. It’s going to be a tough thing for a lot of people to deal with, and for some much more than others. And that’s okay. If you are thinking about or already have been belittling the people who are expressing rage or sorrow, you don’t have to agree, but you really ought to think about what you are doing.

This is not a political advocacy blog per se, but I can’t talk about philosophy and life-as-a-game without addressing the political environment I find myself in. So look forward to more of that later. But for now, I’m going back to making maps for Mapvember 2016 and petting feline beasts.